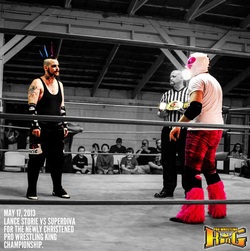 Before 2013 PWK - Pro Wrestling KING had been promoting wrestling under many names, seeming to never find its true identity.

So finally in 2013 like a phoenix, PWK ascended from the ashes of the old company.

With this fresh moniker,came a new championship!
However, still recognizing the former champions, such as Jimmy Shalwin, Brutus Dylan and Ox Baker Jr.

The New Pro Wrestling King Championship would be decided on May 17, 2013 at the Bourbon Park Pavilion in Bourbon, Indiana.

The contenders were decided the month before in a double ring battle royal!

Lance Storie was to face SuperDiva for the PWK Championship.

Two fan favorites were to battle it out to crown the first ever new era PWK Champion.

SuperDiva claiming that he would do anything to win the title, even if it meant bending the rules.

after a highly contested match, the referee Mickey Dutcher was momentarily disoriented, as SuperDiva grabbed the PWK title as if to use it on his opponent, Lance Storie.

But in a moment of clarity SuperDiva threw the belt aside, much to the fans delight.

However as Superdiva picked up his fallen opponent, Lance Storie
caught the flamboyant one with his patented finishing maneuver.

And like that Lance Storie made the pin 1,2,3 and became the New PWK Champion. A title he has defended and still holds to this day.

What challenges lie in store for the Champion? Will he be dethroned by Rampage next year at the PWK/RCW/UPRO co-show in Goshen?

we'll have to wait and see.
thank you for joining us here at PWK and we hope to see you all next year when Pro Wrestling King returns better then ever!
Powered by