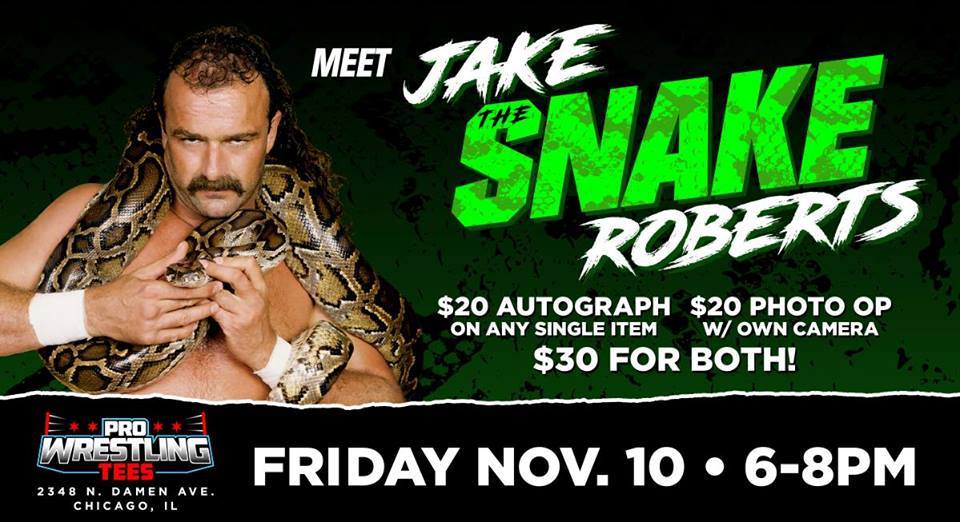 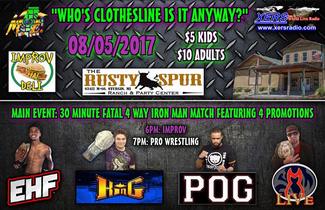 Pro Wrestling King, Strong Style Wrestling, and Revolution Championship Wrestling held When Worlds Collide 4 at the Century Center in South Bend, IN at 7:00pm EST on Saturday July 22, 2017.  The Century Center was rocking with Roller Derby at one end, wrestling at the other, and a wedding reception downstairs.  Imagine the possibilities!  Sadly, the events did not interact, but there were about a dozen matches in a 5 hour show, so let’s get started!
A cage is already up to start the show, as we begin with The Iron Demon Shane Mercer vs. Kongo Kong for the Strong Style World Championship.  When Ref Russ comes out to take his spot, he gets booed!  What?! Seriously, who boos Ref Russ?? I hate this crowd!
Shane Mercer comes out alone, Kongo Kong comes out with the rest of Horrorshow, Jason Saint, Amazing Maria, and Charlie Kruel.  (I spelled her name Cruel in last weekend’s RCW recap, but it’s spelled ‘Kruel’ because of course it is.)  There were lots of powerful moves in this match like Kong slamming Mercer into the cage or Mercer picking up Kong and giving him a fallaway slam.  At the end, though, the personnel of Horrowshow have a trade, as Jason Saint slams the cage door on Kongo Kong as he’s about to escape, allowing Shane Mercer to get the win and to take Kong’s place in Horrorshow!  The crowd gives Kong as standing ovation as he leaves.  I love this crowd!

The second match is a 10 on 1 handicap match: the Crew vs. the Cage.  The cage put up a valiant fight, but after about a twenty minute brawl, the Cage is nowhere to be seen.  Of the crew, B.D. Smooth is the last man standing.  Until later in the show, when he is the last man sleeping.
We have next a Fatal Four Way for the PWK Kingdom Championship, held by Theo Storm.  He takes on Shady Chris Xion, Jayden Quick, and Joe Jitsu.  After Theo retains, Tank comes out to challenge him to a cage match of their own at August 6 at Headlock on Hunger in Elkhart.  Theo thinks this is a fine idea.

The third (real) match is a Battle Royal featuring … lots of people!  It’s won by Chocolate Tic Tac, who eliminates Fireball to win.
Next follows a 6-man tag match with Noah Walker and Team Legend-Dairy (w/ Cynnamon) vs. Lightning Bolt Johnson, JC Bunyan, and Tank.  This is a combination of both Lumber and Lightning (LBJ and JCB) and Brute Force (JCB and Tank … Tank, you need more initials), so I’m going to call them Lumber and Lightning Force.  Ref Ray is in charge of things and he’s wearing new (?) sneakers that are so bright they are distracting, and they probably should have gotten their own ring music and introduction. Although still not able to be in the ring, Brutus Dylan is out with his pals in Lumber and Lightning Force, and eventually gets tired of Cynnamon’s interfering nonsense; he carries her off to the back, allowing LBJ and JCB to pull off a double pin on Team Legend-Dairy.

Now, it’s time for a fight, as we get Chuck Taylor against UFC’s Filthy Tom Lawlor.  This was a really nice combination of grappling and some high impact moves.  Eventually Lawlor’s ring man causes a distraction, allowing Lawlor to get Taylor into a submission hold, and Taylor taps.  (That’s Taylor’s head and shoulders peeking in the top of this picture:)

Ref Russ is out to oversee the RCW Heavyweight Championship match between Anthony Toatele and Jack Thriller (c) and there’s another smattering of boos.  Geez, people, what did Ref Russ ever do to you?  I hate this crowd!  After a brief scare where Thriller lured Toatele into trying to attack him but accidentally knocking over poor Kenzi instead, Toatele comes away with the win, and we have a new RCW Champion!  Several RCW regulars come out to help celebrate, and the crowd gives lots of applause and chants.  I love this crowd!

The next match makes me happy as I finally got to see Matt Cross in person after a couple of failed attempts.  Matt Cross and Dominic Garrini are taking on The Soul Shooterz for the new Strong Style Wrestling Tag Team Championship.  Matt Cross slapped my hand as he made his entrance, and my palm still stings.  Yowch!  The Soul Shooterz win when Apollo Q. Starr clobbers Dominic with one of the two belts while Dru Skillz has everyone else distracted.  Here you can see Dru Skillz using his power to slam both Cross and Dominic, and in another pic, I get to see Matt Cross upside down, which seems to be his natural position.  Wrestling fan win!

Rod Street is out next to take on Gillberg.  During the match, the ref had enough of Street’s bickering that he took off his shirt and handed it to Gillberg, switching places for a brief time while the (ex) ref chased Street around the ring.  As the ref returned and put his shirt back on, Gillberg took advantage of the moment to spear, jackhammer, and pin Street.  Gillberg looked like a guy having the time of his life out there, smiles all around!

Next up is the match that on a shorter card, should have been (and probably would have been) the main event.  The Spirit of Detroit are out to defend their PWK Tag Team Titles from the Rulers of Wrestling in a Tornado Tag Team match.  These guys brought it, and knocked each other around inside and outside of the ring, with many near falls.  It was so good, I’m allowing it four pictures! ROW are a lot of fun to watch, and SoD really work the big man / little man dynamic well.  During the match, Jon’tae Kieth attempted (and missed, but who cares, it was still awesome) a really impressive … 720 degree?  1440 degree? splash?  Whatever it was, dude looked like a fidget spinner in flight as he went around.  Spirit of Detroit retains their titles.  Their personal ring announcer Tiffany Tilli got to introduce them and proclaim their victory.

Now it’s the Ladies’ turn!  Rudy Jordan is out to take on Amazing Maria (w/ Horrorshow fellows Jason Saint and Charlie Kruel) for the Revolution Strong Women’s Championship.  Jason Saint ain’t so impressed with Rudy’s credentials, though, and so (apparently having been given all the power) suggests that instead, Rudy take on Maria’s tag partner Samantha Heights, and if Rudy wins, then she can have a title shot.  (Saint also points out Maria’s injury, which requires her to wear a face shield, as a contributing factor.)  Rudy tries her best and does quite a few high impact moves, but Maria sneaks in and hits her with the face shield while the ref is distracted (I’m using the word “distracted” a lot in this recap, huh?), so that Samantha Heights gets the win.
The second to last match is another 4-way, this time for the PWK On-Line Championship.  It’s Ames against Steven Drochner, Adam Bueller (c), and Jay Bradley (who was Aiden O’Shea in Impact).  On his way out, Ames is directed to a sleeping BD Smooth, who’s taking a siesta halfway up in the middle sectin, and Ames goes to wake him up with a surprise wiggly lap dance.  At this point I’m pretty exhausted from the long card, so some lighthearted fun, along with Jay Bradley tossing everyone around like Tiddlywinks, is exactly what I need.  Bradley stays outside the ring for a while tending to his ankle after leaping over someone, and Adam Bueller gets the pin.  He should have a wheelbarrow for all those belts he carries around!  This was also the debut of his new mask, but I did not get a good picture of it.


And fiiiinally, we get to the last match, which is a non-title (you know what that means!) tag team special attraction, featuring RCW Tag Team Champs Guns & Aggression against Kevin Storm and The Hurricane.  Once again, Ref Russ is booed.  Sigh.  That’s like booing a kitten, I just don’t get it.  The Hurricane questions Mance Warner’s manly status in spandex, and then helps give Kevin Storm a good birthday by helping him secure the tag team win.
The next PWK event is Headlock on Hunger, Sunday August 6, 2017 at the Texas Roadhouse in Elkhart, IN.
The next RCW event is scheduled for August 25, 2017 at the Batelle Community Center in Mishawaka, IN.
The next SSW event?  I don’t know.
Thanks as always to Ring Announcer Ryan Anderson with assistance on a couple of names I didn’t hear clearly at first.
_________________________
If you’re so inclined, check out the Northwest Indiana Wrestling Action Program (NWIWRAP) broadcast Sundays at 9:30pm, right after Mostly Metal, which runs Sundays from 8:00-9:30pm CST, on WVLP 103.1FM in Valparaiso, IN.  If you’re not in Valpo, catch it streaming on http://www.wvlp.org and the Tune In Radio app.  Rebroadcasts happen Wednesdays 10pm – midnight, and NWIWRAP is archived on YouTube, just search for NWIWRAP.  You can find @nwiwrap on Twitter.  And you can subscribe to the nwiwrap.wvlp@gmail.com Google calendar, where I try to keep up to date calendar postings of shows in and around the NWI region.  Because WRESTLING! 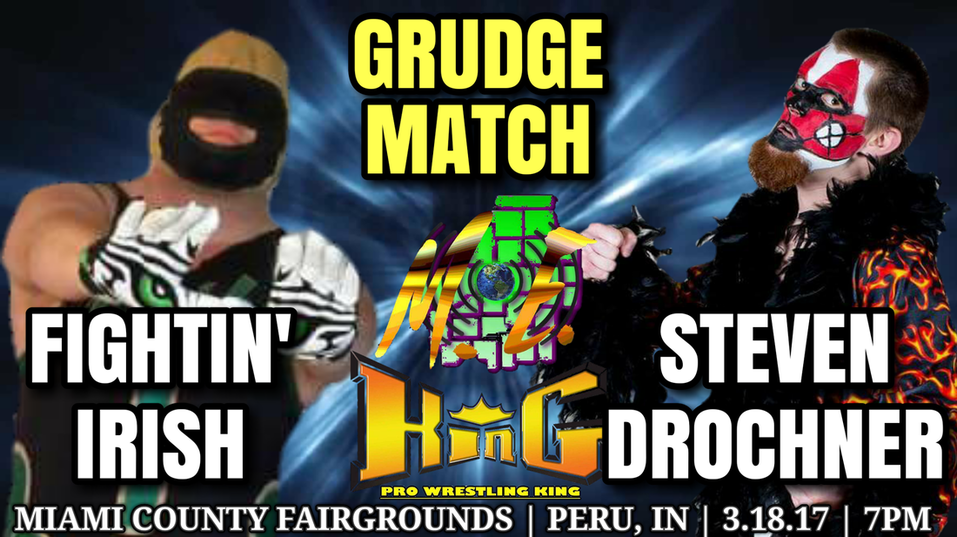 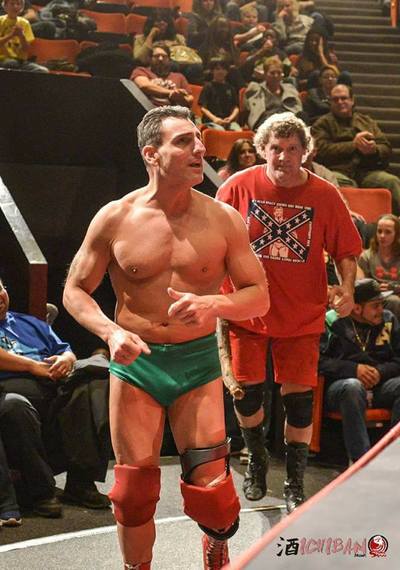 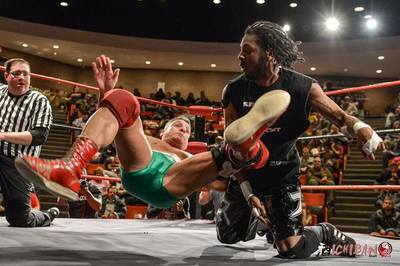 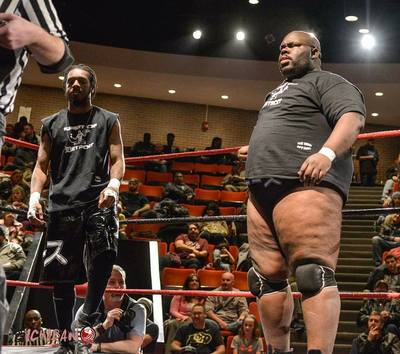 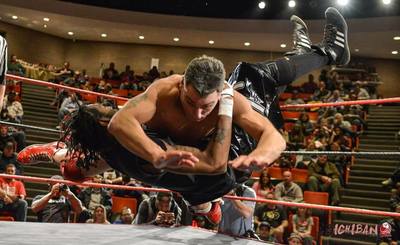 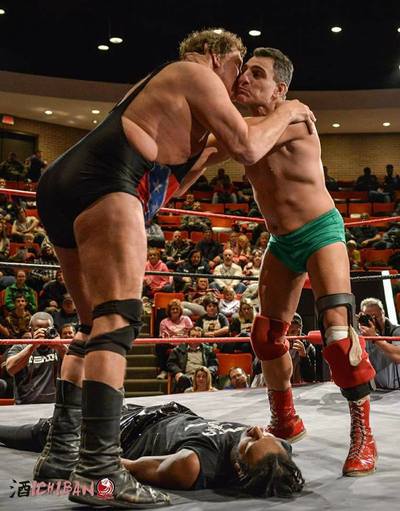 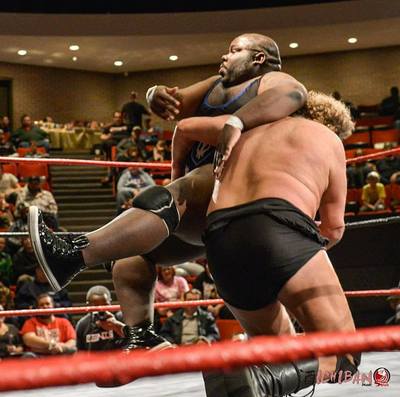 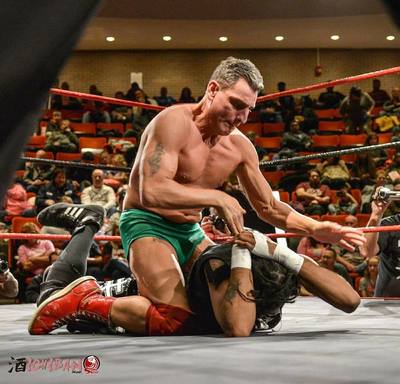 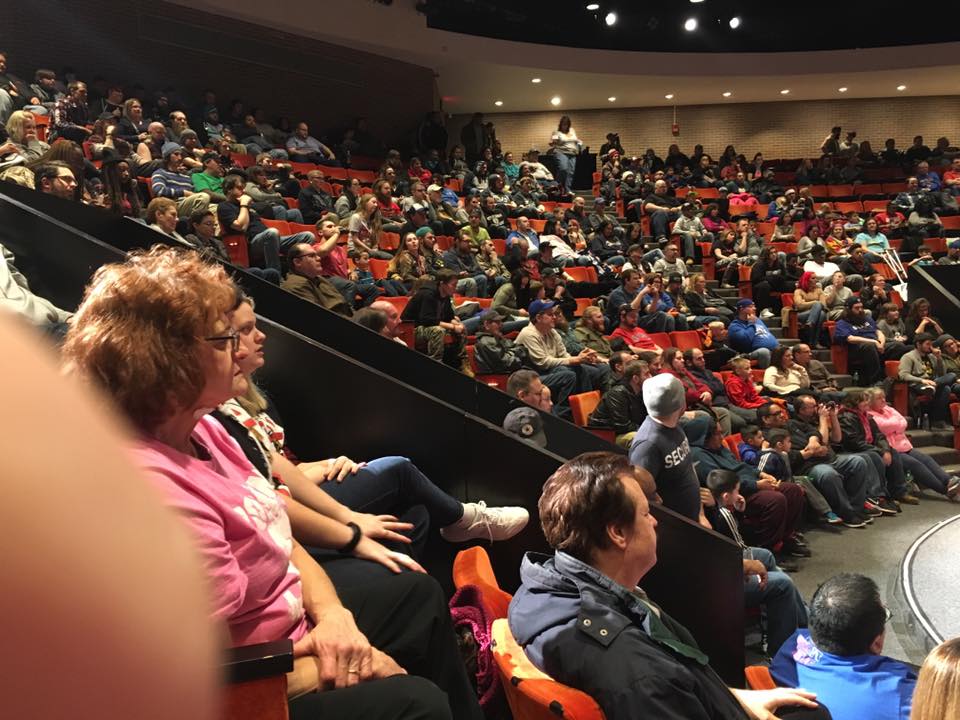 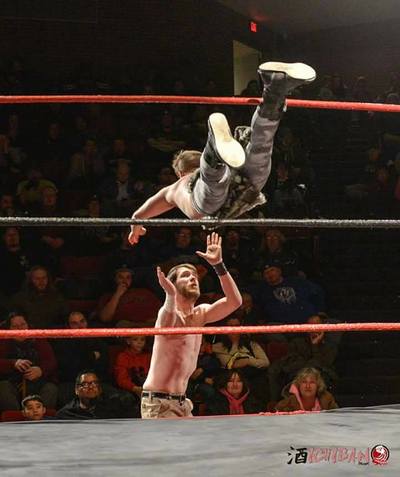 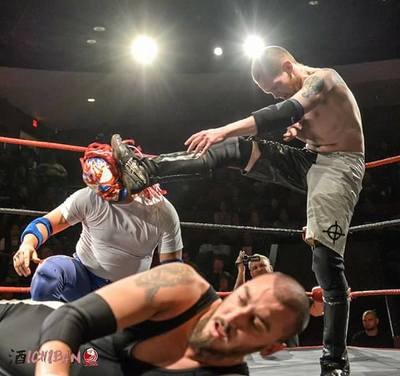 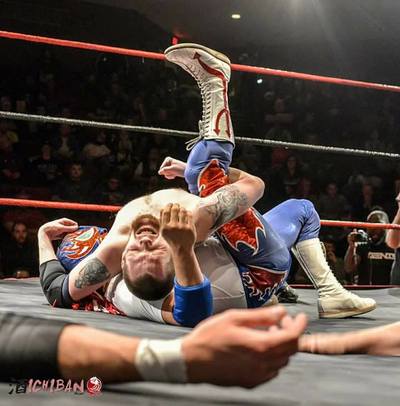 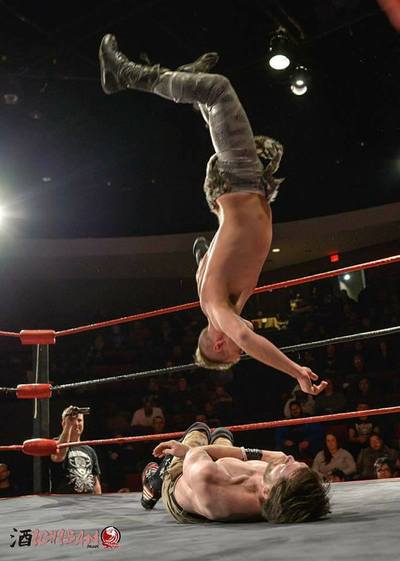 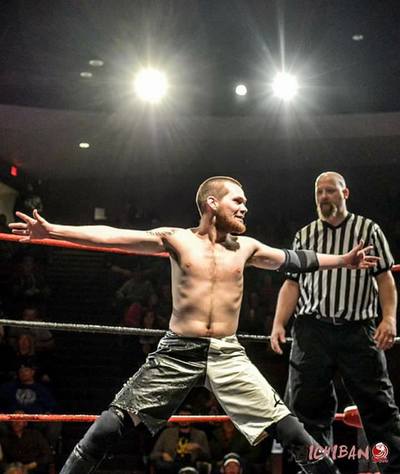 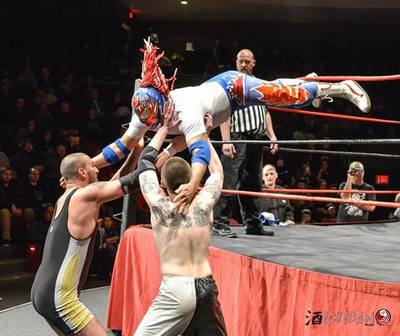 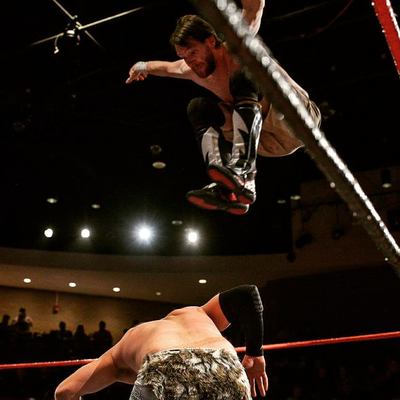 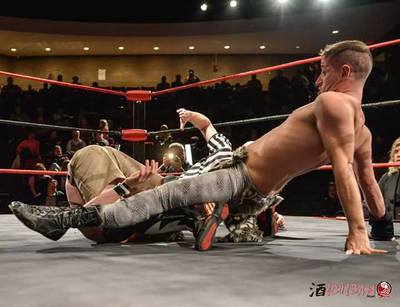 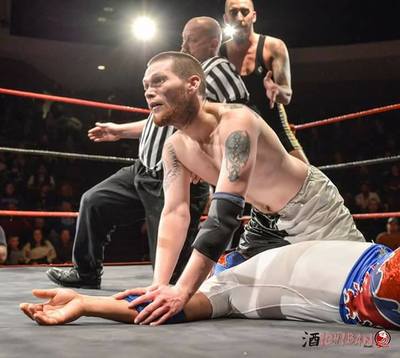 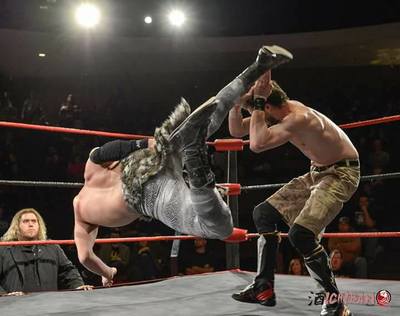 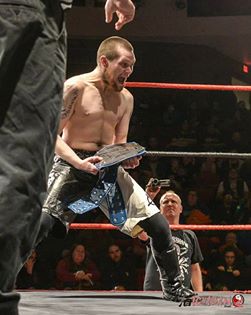 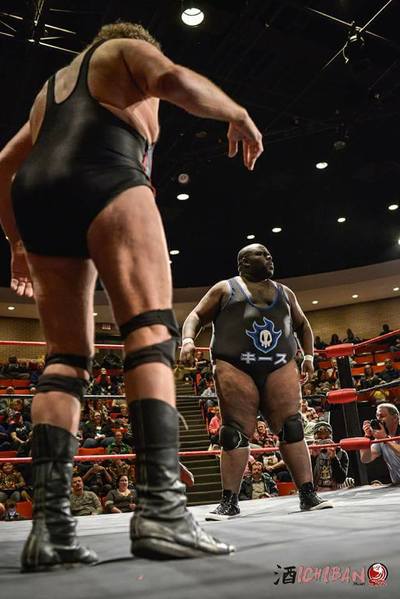